Up to the 1930s many model cars did not copy a specified original car, but were made to represent typical body styles or typical kinds of vehicles. Several companies have released re-editions of such model cars in recent years. But sometimes there is no indication of the original vehicle make even on modern miniatures, for instance on inexpensive promotional models. With such models a manufacturer can evade the licence fees claimed by the producers of the original vehicles.

In my collection there are several models of non-specified original cars. As information about original cars or scales is unavailable or incomplete, these models are not listed in the model database, but are shown on this page.

In 1911, the Dowst company from Chicago issued a tiny limousine. It is possibly the world’s first "true" diecast model car. The company, which later marketed its models under the Tootsietoy name, had already made three-dimensional reproductions of cars in a series of cast lead figurines some years before, but the limousine was the first miniature with turning wheels and axles. 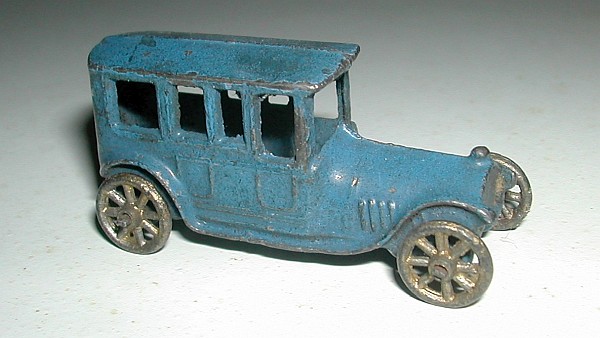 The model is only 5 cm long and made of lead – zinc alloys were only introduced in the 1930s. It remained in the company’s catalogue until 1928; more recent items from the 1920s have disc wheels instead of the original spoke wheels. It was also copied by other manufacturers, including SR from France.

The German company Schuco has produced replicas of their historic tinplate models since the 1980s. The models are originally dating from the 1930s to the 1960s, are usually featuring clockwork motors and are partly manufactured with old original tools. Besides exact copies of historic models, similar newly developed tinplate models are also made by Schuco. 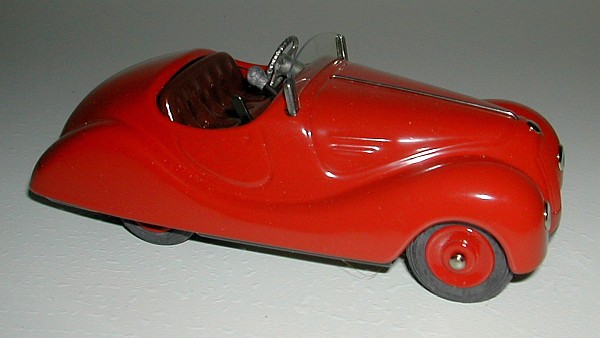 The first Examico was produced in 1936. The model is featuring four forward gears, neutral and reverse gear, clutch, handbrake and steering. The body reminds of the BMW 328. Length of the model: 143 mm. 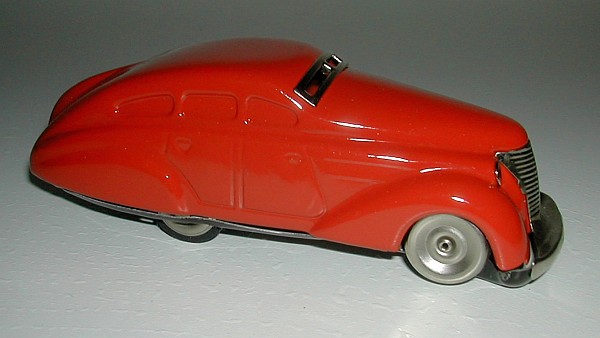 The turning car was also originally released in the 1930s and looks similar to a Maybach streamlined limousine. Due to a driving wheel at right angles, the model automatically makes a left turn when it drives up to the edge of a table. Length of the model: 139 mm. 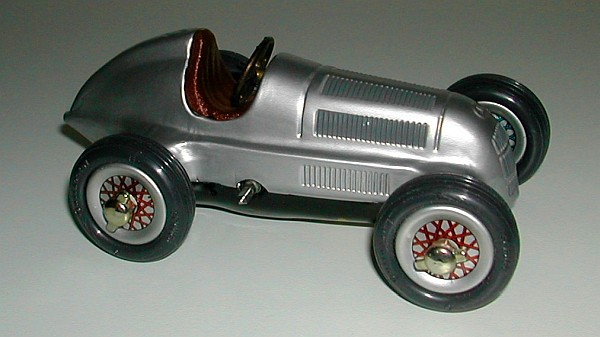 Introduced in the mid-1930s, the Studio racing car remained in production for many decades. It is inspired by the Mercedes-Benz W25 from 1936, features steerable front wheels and differential rear axle and comes with a set of tools allowing to exchange the wheels. Length of the model: 140 mm.

Soon after World War II, the Schuco concepts were copied by a small manufacturer in Switzerland: The company Gysin & Heinimann, based in Eptingen in the Canton of Basel-Landschaft, produced clockwork-powered tinplate cars and model railways between 1945 and 1953 under the brand name of Jibby. One of their toy cars was a copy of the Schuco Examico, either with gearbox ("Jibby 303") or with a music box ("Radio Car"). A turning car was also part of the range, but with an original body. Exports mainly went to Belgium and the Netherlands. Although Jibby had no licence from Schuco, their copies were tolerated by the German manufacturer. 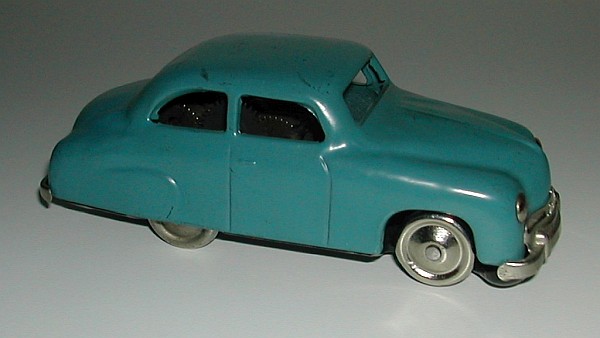 The Jibby turning car has a different body from the Schuco model, rather looking like an early post-war American sedan. The body is not identical to other Schuco designs either. The car was available in four colours: red, dark green, white, and blue. Length: 13 cm.

Early models made by the English manufacturer Dinky Toys are sold at very high prices today. But you can also get copies of these very rare models from the 1930s. Since the 1970s, several manufacturers have released such copies, e.g. Dave Gilbert who later also added his own models in the style of pre-war Dinky Toys to his D.G. Models range. But on most Dinky Toys copies no manufacturer is indicated. These models are mostly exact copies, but still they can easily be distinguished from the original models: They are made of white metal instead of diecast, so they are slightly heavier. Furthermore, contrarily to the copies (of course), most original pre-war Dinky Toys suffer from metal fatigue. 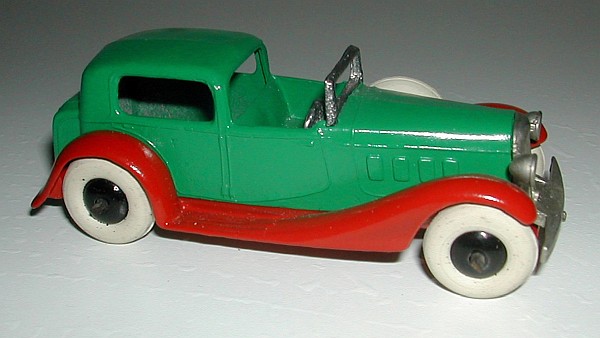 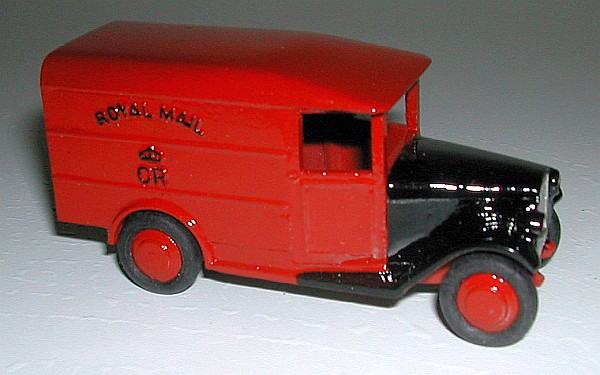 Article No. 34b, produced from 1938 to 1940 and from 1948 to 1952. This item is easily recognizable as a copy because of its wheels, different from the original Dinky Toys. The manufacturer of the copy is indicated on the baseplate. There it says: "Model Road Productions - Morris Van - Nr. 4". Length of the model: 83 mm. 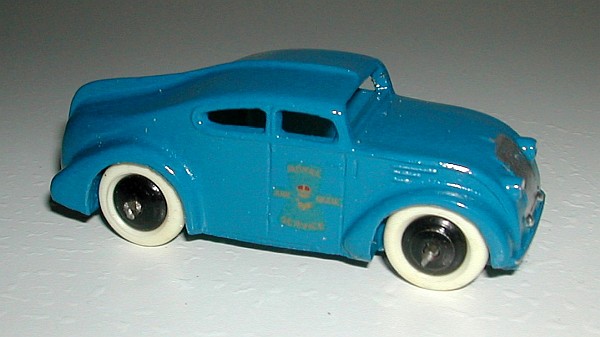 Article No. 34a, produced from 1935 to 1940. This model is inspired by a real vehicle, an advertising car introduced by the British Royal Air Mail Service in 1934 (Autocult has released a detailed model of the same car). Length of the model: 83 mm.

Making wooden toys is a traditional industry in the Southern part of the French Jura region. Until the 19th century, most craftsmen were farmers having a workshop at home. Between 1890 and 1930 the first industrial enterprises specialized in toys appeared, and the small city of Moirans-en-Montagne became a centre of the French toy industry. In the 1950s and 1960s several local companies changed over to plastic products, but others such as Vilac, L'Arbre à Jouer, Charliluce, Janod and Jeujura kept up the production of wooden toys until present days. Car models made of painted wood are namely made by Vilac (founded by Narcisse Villet under the name of "Villet Frères" in 1911) and Foulon (founded in 1953). Usually these models are generic replicas of vehicles, without a specified prototype. Racing cars are particularly popular; among others, Vilac makes a wide range of such cars in various forms, colours and sizes. The history of toy production in the French Jura region is extensively documented in the Moirans-en-Montagne toy museum. 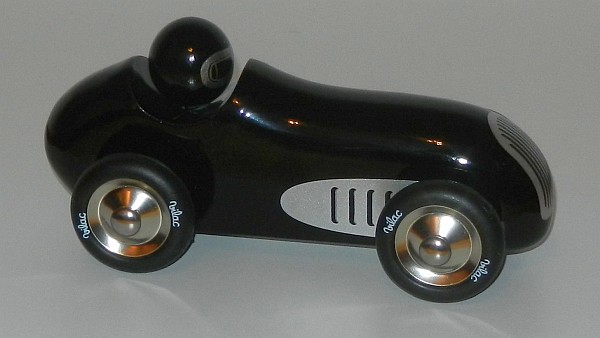 The Vilac "Old Sport" car has been inspired by the single-seated racing cars of the 1930s. In addition to the black version (article no. 2286K), the model is also available in other colours. It features a massive wooden body, metal axles and wheels, and rubber tyres. Length of the model: 20 cm. 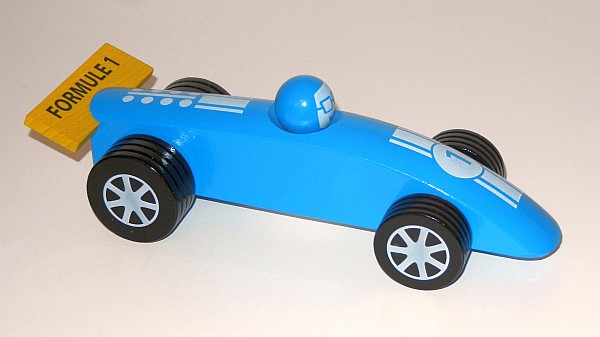 The Foulon "Formule 1" car represents a more modern racing car with the engine behind the driver and rear wing. The pictured model (article no. 8052) measures 22 cm in length, but there is also a smaller version (14 cm long). Both versions are available in blue or red. Body and wheels are made of beechwood.

In Lima, the capital of Peru, some architectural students finance a part of their studies by manufacturing cardboard models of vehicles to be used as a decoration on architectural models. These vehicle models are available at shops for architectural supplies and are usually held in the common scales for architectural models, such as 1/50th, 1/100th, or 1/200th. Many different models are produced: saloons, vans, buses, emergency and construction vehicles. While some models are recognizable copies of real vehicles, such as a Nissan Fiera pick-up or a Caterpillar dump truck, many of them are generic. I got the models in my collection from a German collector, who discovered them on a trip to South America. 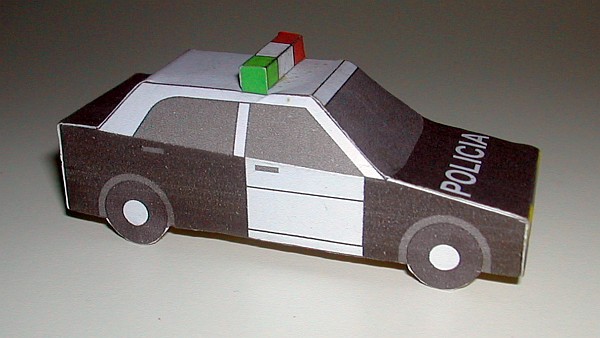 A saloon in the historic black and white colour scheme of the Peruvian police with a light bar on the roof. The length is 80 mm, which corresponds to about 1/50th scale. 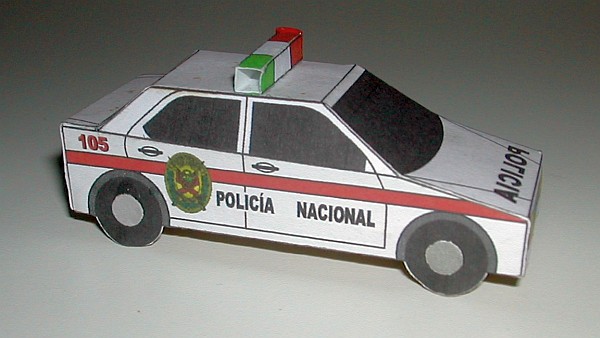 The original aim of the Swedish company Playsam, founded in Kalmar in 1984, was to produce well-designed high quality wooden toys for children. The "Streamliner", designed by Ulf Hanses, was their first and most famous product: a piece of wood without sharp edges and angles on four wheels, painted with high lustre paint. Thanks to its clear and simple lines, the toy also caught the interest of adult people interested in Scandinavian design and was selected as a design classic by the Swedish National Museum. The Streamliner became the base of a whole product range including single seaters, two-seaters, convertibles and even buses. The minimalist approach of the Streamliner is also characteristic of the models of real cars released by Playsam, which just capture the essential lines of their prototypes, but remain clearly identifiable. 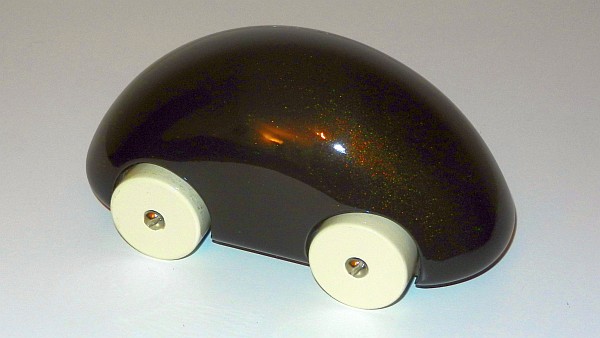 Playsam Streamliners have been produced in many different colours. The classic schemes are black with red wheels and red with black wheels. The "espresso" version with dark brown body and cream wheels (article no. 12656) was released in 2012. Length of the model: 13.5 cm.

Major sporting events can be quite interesting for model car collectors, as commemorative models can sometimes be found among the piles of promotional merchandise. This was also the case at the UEFA Euro 2008, the European football championship which took place in Switzerland and Austria in June 2008. Three truck and bus models officially licensed by the UEFA were on sale, an 1/87th scale advertising truck with the logo of the event and drawings of the Euro 2008 mascots Trix and Flix, a similar truck in 1/64th scale, and a team coach also in 1/64th scale.

The models were made in China for M&S Global International from Waldenhofen, Germany, and distributed by a company named Living Picture. According to the package, all models have been released in 16 different liveries, each representing one of the participating countries. However, there seem to be models for England, whose team didn’t qualify for the Euro 2008, but no models for Russia, who not only participated, but reached the semi finals. In Switzerland, the red and white trucks and buses of the Swiss team were available in large quantities at many shops, whereas the models of the other teams remained very rare. In Austria it was easier to find models from various teams. 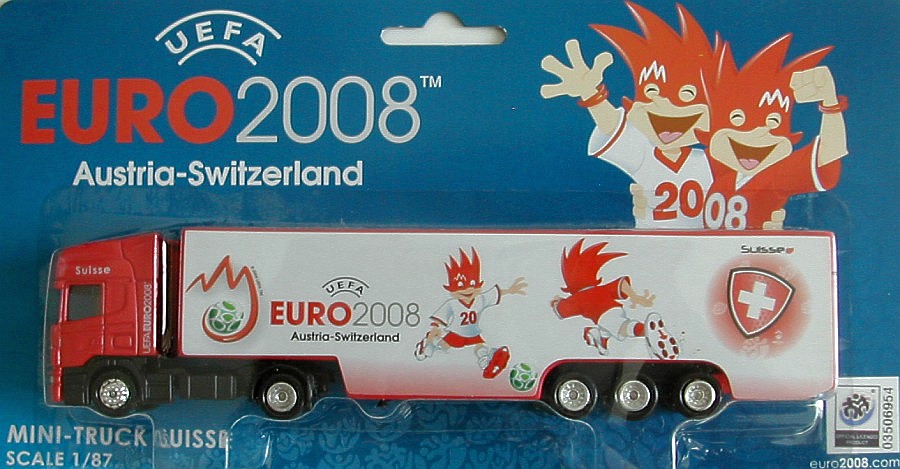 The truck models come on a blue blister card. The quality is on a par with the inexpensive promotional trucks made for breweries and other companies by manufacturers such as Grell, Hümmer or Top-Style. The cabs are diecast metal, all other parts are plastic. The internet address of the distributor, Living Picture (www.livingpicture.com), is stamped on the baseplates of both models. There is no indication of the truck makes on the models, but the 1/87th scale model looks like a Scania and the 1/64th scale model seems to be a Mercedes-Benz Actros. 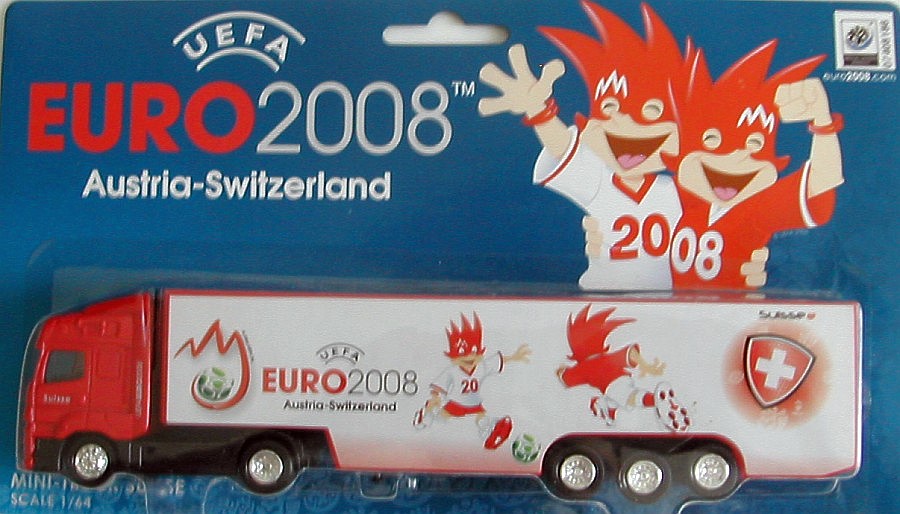 The team coach is a generic modern diecast bus with very large wheels and wide tyres. This model comes in a blue window box. The manufacturer indicated on the baseplate is 2BToys, a Dutch company which usually distributes model cars and buses finished with logos of European football clubs and cycle racing teams. But the model was originally made by Maisto, who released buses using the same casting some years earlier.